Every year the days get longer, the weather gets warmer and I get a hell of a lot busier.

Spring time is event season in Australia, my chance to lift the roller door on the garage, hook up the trailer and load all my ideas into a complete package that brings a little slice of ETS to the people.

WTAC was my chance to try something a little different, a new design, new merchandise, new techniques of display and an overall cleaner and simpler ETS.

I loved it but with only limited space it meant leaving a heap of critical ETS elements behind in the garage, with a home town Geelong event I could put everything into this and go all out!

Thanks to the Geelong Revival staff we marked out some decent real estate to make this stand the biggest of all time.

The Hilux was in the trailer and the first to be dropped off down at the site, it still smelt like burnt rubber from last weekends fun times! It was the first of 6 trips I would have to make.

It always deserves a front row seat, having clocked the quickest time in the (invited category) sprints the previous year I was looking forward to driving again.

Having the engine bay mostly finished on the PS13 it also made its way down to the waterfront, it attracted a stack of attention.

I love getting it out of the garage, it brings a new perspective to the build for me.

It now shares a lot more of the Hiluxs build processes and ideas.

It commands a second and third look.

At the other end of the scale the Honeymoon Hauler made bringing 5 bikes an easy task.

Front and center sat the 1951 Triumph drag bike I had recently finished building, it still has that sweet scent of methanol and nitomethane on its breath.

Nothing about this bike makes sense, to me though its stunning and I couldn’t imagine life without it.

Flying the more practical flag was the 1973 CanAm 250 race bike I restored and ride.

It shared the grass with my 1986 HD Sporster Flat track racer I built and ride regularly.

They both sat infront of the Tees that hung on the racks I recently built for the WTAC stand.

The 1967 XLCH Sportster made it aswell.

What it lacks in practicality it makes up for in style.

In the week leading up to the event I had an idea of what I wanted the stand to look like.

I measured the Flats Movie land speed race bike and made up a stand to display it on.

Having conquered a land speed record on this bike its a great conversation starter and a good way to enlighten people about the Flats Movie.

With Deans amazing image blown up on the background it gives people an idea of the effort we all went to as a team to produce it.

Overall the stand portrayed exactly what ETS is all about.

With the new Square Contactless Card Reader and app it made and running the stand a breeze, in the past I have used PayPal but it was always annoying having to log in between transactions, this connected lightning fast and didn’t miss a beat.

But when it was time to get away there was plenty to look at, heading past the vintage speed boats and straight into the motorcycle pits.

My favorite from last year was back.

To the king of them all.

“In 1975 Yamaha wedged a Yamaha TZ750 two-stroke road racing engine inside a dirt track frame. On a bike that was considered unrideable due to its excessive horsepower, Kenny Roberts came from behind on the two-stroke, and overtook the factory Harley-Davidson duo of Corky Keener and Jay Springsteen on the last lap for one of the most famous wins in American dirt track racing history. Afterward, Roberts was famously quoted as saying, “They don’t pay me enough to ride that thing”

I have never been so close to motorcycle royalty in my life.

I was imagining having this warmed up in the infield by a Yamaha mechanic, getting suited up and throwing a leg over it, how your able to even come near getting the most out of this thing is beyond me, it just solidifies that there are crazy people in this world that have no regard for their own safety and I love it.

Equally impressive is the Irving Vincent race bikes, another southern hemisphere success story comes in the form of these bikes, having won the 2008 Daytona Twins Championship these bikes are an amazing achievement and built to a level that has to be seen to be appreciated.

I didn’t have much time but I know Ill come back to these photos and find inspiration from the detail and craftsmanship.

They were joined by a third member of the Irving Vincent family.

None other than a sidecar version, possibly equally impressive as its two wheeled partners.

The pits were full of amazing cars from the modern era on Saturday and the classic era on Sunday.

I managed to walk through on Sunday but didnt make it through the pits on Saturday.

Its what makes the Geelong Revival a festival of motoring.

Its difficult to not find any of this interesting.

Open wheeler’s with real history still being ran competitively well after their era.

I dont know what it is but the luggage in the boot sparked my interest.

Out on track the Hilux was flawless, I didn’t bother with a transponder for this years racing so I made things as interesting for the spectators as possible. The manual line lock valve that I plumbed under the steering column was useful for the take off, a little brake creates a lot more show.

Off the brake it slingshots away, banging through the gears and keeping it straight at the same time while keeping my eyes on the finish line is a lot of work.

All the while I am telling myself to make sure I remeber to disengage the line lock before braking after the finish line. I am probably close to 200kmh and with 300m to brake it gets a little scary.

I had a great time at the event, I would like to thank everyone for their support and interest, to have so much support from my home town crowd really made all those hours of work worth it.

Thanks to Dean for the action shots and all his help, Lee for filming and helping out with the beer consumption, Celia and my parents for helping out also. Stay tuned for the video and I will see you there in 2017 where you could possibly see me pilot two cars down the track! 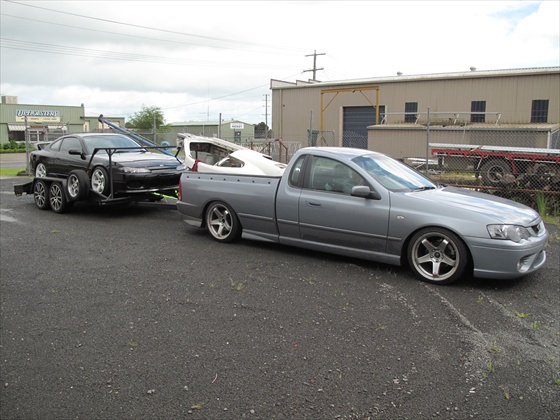