So this was it, the day that I had dreamed of since the very beginning. Azhar had orginised the racetrack and with Gary’s guidance I had the whole place to myself, it doesn’t get much better than that. I wouldn’t be alone on this day though, it was a special day for Matt as the director of Dream Build Drive, the documentary on getting the Hilux to the track and making it work has been the focal point of the NZ visit. Matt hand selected a team of New Zealands best film crew, we had a budget to work from the Pozible Campaign (huge thanks to those that donated) we had a two man team on the specially setup chase car, three man team on the octocopter, a data wrangler who would be downloading and organizing the data outputted from the Red Epic camera, we also had a sound technician and camera assistant all on hand to make Matts dream come alive. 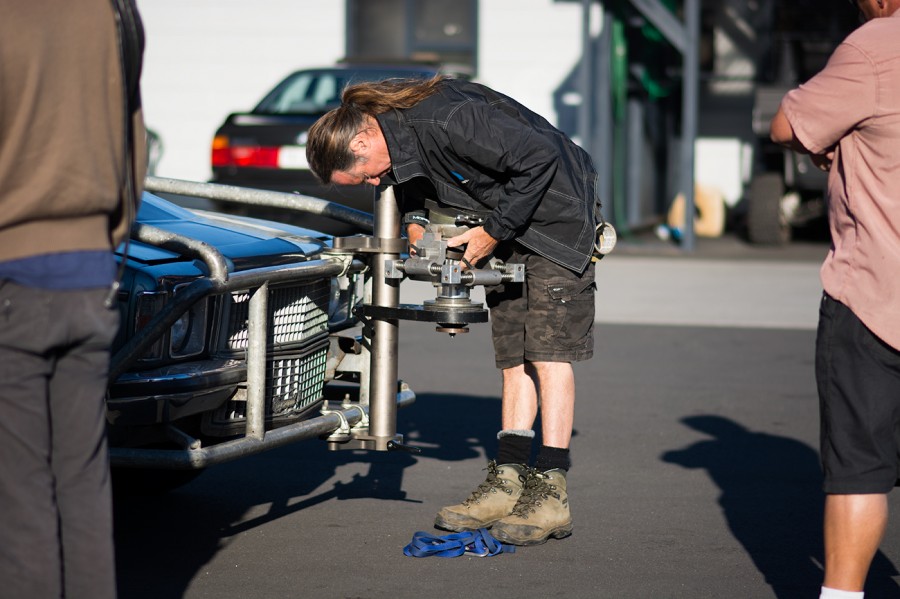 I invited Roo Wills along to help me capture this day in stills, he did a great job and these pictures are all from his reel, Ill be releasing desktops to those that supported the campaign as well as all the behind the scenes action. Thanks Roo. 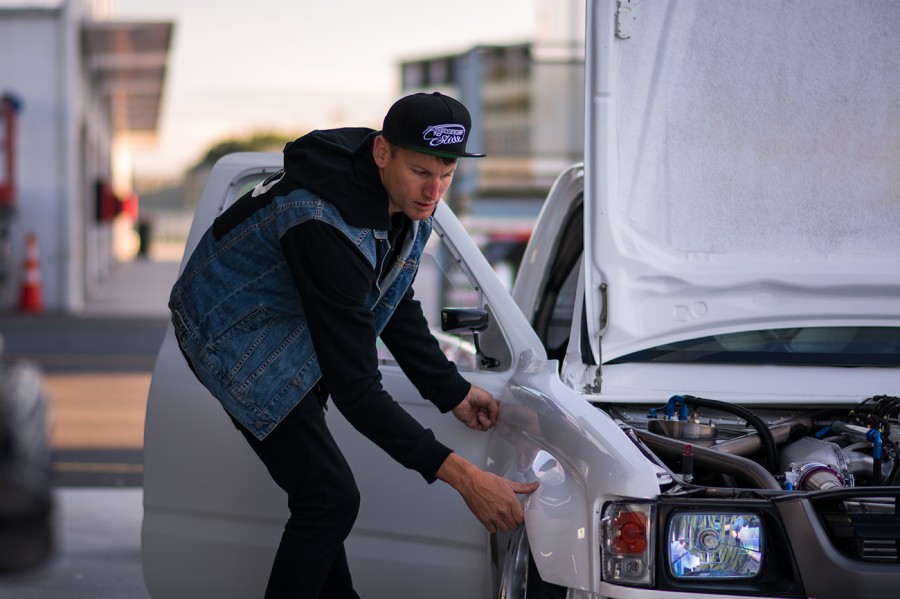 As the builder of the car my sole role was to drive the car and make sure it worked, to the film crew this probably seemed like a pretty simple job but I had a lot of pressure on me to perform in front of the camera. Some people ask me what I am, a builder or a driver, I would say I am both, I build to drive and drive to build. There’s no better feeling as a builder than to get the full potential out of your creation, feel what your hardwork is doing through each little noise, movement and input you give the controls. At the same time there’s no better feeling as a driver to know every detail of the machine your controlling. I know all too well that anything can go wrong at any time, what I am doing is a huge gamble, I set goals for myself, work hard at achieving them and at all times hope for the best but understand what could happen. 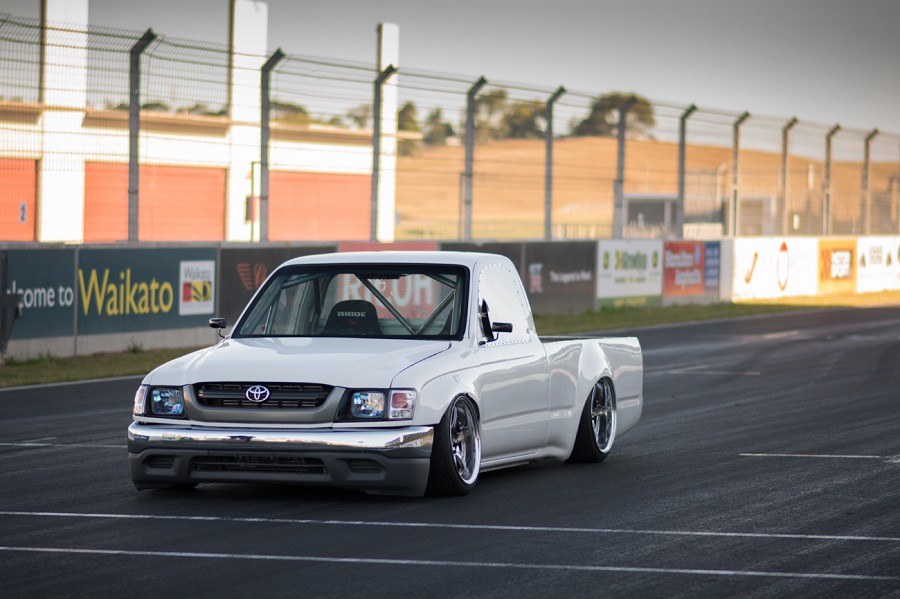 As the car sits on the racetrack shaded by the Hampton Downs Apartments I can appreciate the road that I have travelled to get here. Such perfect weather was on hand aswell. Its that electric mix of nerves and excitement, as I slip into my race suit and just hope for the best. As they set up the first shot I took the chance to get some laps in. 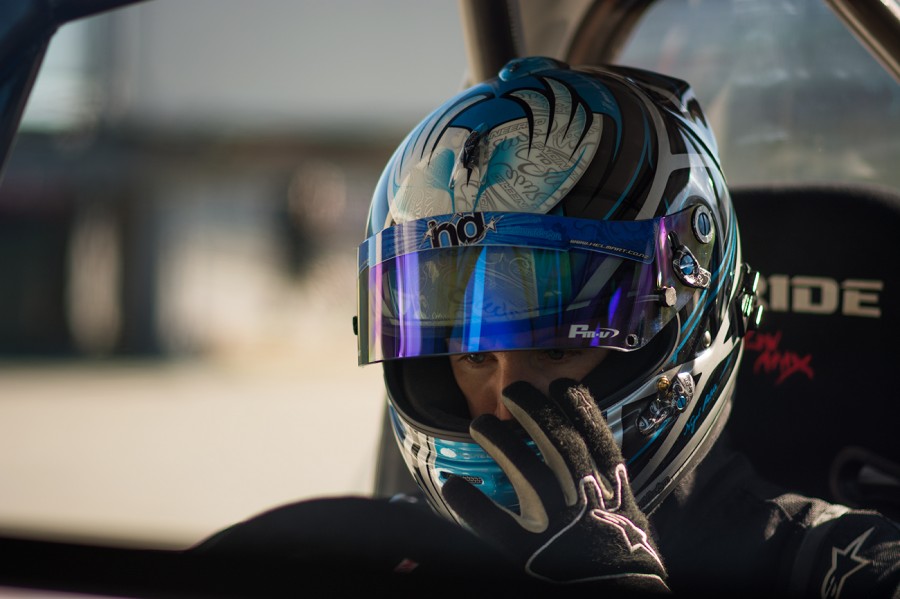 Dropping down into the cabin and sliding my helmet on I take a deep breath, hit the ignition and fire the SR20 into life. A quick look on the dash to make sure we have decent oil pressure, charging volts and fuel pressure I select first gear with that mechanical “clunk” and release the clutch firing the hilux down the straight away. 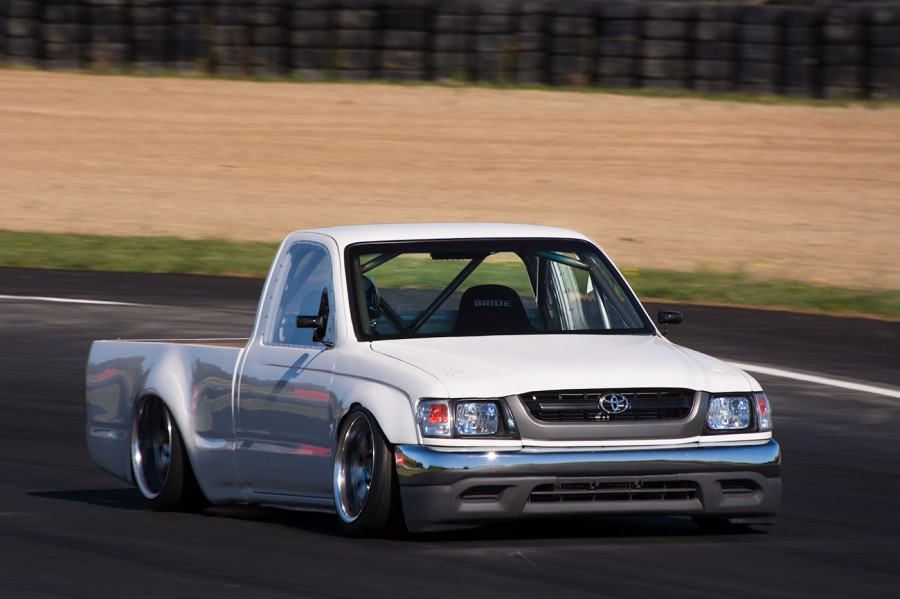 The small amount of laps that I was able to do in Sydney at WTAC wasn’t enough for me to know how the car worked, I knew it was ridiculously grippy, fast and very very direct. To drive a car like that around a circuit like Hampton Downs isn’t a huge issue, the layout is fast, flowing and the track surface is very smooth with a lot of run off. I had three laps to get some practice in, I approached the first corner with a cautious entry, a cautious entry in a fast car never gives great results, a fast car needs a fast flowing entry as the higher G forces hold the angle while it gives me the driver a chance to react to line, gear and acceleration changes. As soon as I picked up the pace I learnt what the Hilux was capable of, it was able to hold big angle, it drove through the corner with incredible pace and stayed very flat and flowing.

Those three laps were the icing on the cake, from the garage floor to a full car in 2.5 years strapped into the seat and steering around a racetrack in another country, feeling the feedback from the thought and effort gone into each little part it was pure automotive heaven. It seriously could not get any better than what I was feeling at that point, its a feeling I had been chasing for years, accomplishment, the end of the road, all the questions in my mind were finally answered. The only chance I had to reflect was at 165 kmh down the main straight, as I crossed the start line I had to blink away the emerging tears that were welling up.

There was business to be done though and we spent the morning getting the most amazing footage you have ever seen, I cannot wait till Matt spends hours at his desk cutting together what we have produced so far, its truly the ending of the build that I had dreamed of, I cant wait to show you. Having such a light car created a unique issue, there was a real lack of tyre smoke, in fact I did heaps of laps on just one pair of tyres, I went through over 70 liters of fuel and still had not used 1/2 a pair of tyres. The harder they spun the faster the ute would go, it seemed to me that I was down on power, this might be true and something I will check before the next outing but if it is infact making the 287rwkw it was tuned at im going to need a little more. With more power I will be able to grab another gear mid corner and really start making some smoke. Its not all good news as before we got into the octocopter scenes I had a breakage, the welds on the Mazworx inlet manifold cracked and was creating a high idle, I knew something was wrong and it wasn’t until I rolled into the pits that I found the problem. I removed the manifold, took it to Motorsport Services and they re welded it but not in time for us to get the scenes we needed, with some negotiation we managed to secure the racetrack for the next morning. Unfortunately the octocopter guys had another booking and couldn’t fit us in, we took the liberty of getting the Red Epic camera and data wrangler back on board for some tripod shots. I would be looking forward to spending another day at the track. Without the involvement of the people who donated to the Pozible campaign, this day would have never happened, for Matt to cover this story with the quality people and gear that we had available to us on the day is massive for us, passion, personal sacrifice and pure hard work go a long way these days, it’s amazing the power that humans can posses, to everyone that played a part in this day I thank you so much for believing in what we are doing.

I hope everyone’s looking forward to the finished product.