I guess you could call this the calm before the storm, with WTAC coming up fast Im not going to get a chance to think or type. This morning I woke up to my alarm with a clear mind. I spent the weekend working my guts out to finish all the little things on the Hilux and its paid off with that feeling of accomplishment. This time 3 years ago I was in a different space, I had a dream and I was about to jump into the biggest project I had ever undertaken in my life. As soon as 2011 started I took a trip to Sydney to pick up a 2002 model Hilux cab.

After a few beers my friend Pav and I decided to document it on Engineered To Slide, a name that was thought up in about 5 minutes. The goal at that point was to weld the Hilux cab on an S15 floorpan, I had no intentions of removing any of the running gear just cutting the top of an S15 and MIG welding the Hilux body on. 6 months was the projected timeframe from start to finish. I put proposals to companies and wanted to have the build sponsored but no one came to the table, thank god!

The rest is a well documented story of how one Hilux went on a journey of a lifetime. From those early days a lot has changed but im still the same person, sure I have more skills and have learnt a great deal but Engineered To Slide is still the same blog it always has been, there has been a lot of work along the way to do things the best I can, Pav is working on a brand new look for this website and I cant thank him enough for being the technical brains behind what you see on your computer screen, the milestones that ETS has achieved is beyond belief.

A lot of people ask me whats next? I dont see anything like the Hilux being created ever again, doing something like this without financial support puts amazing strains on everyday life, there’s a lot of sacrifices that I have made to make this a reality and now its time to tie up some loose ends.

The PS13 will undergo a lot of TLC, its basically ready to tune and the desire to get out on track in that car is strong, my goal is to do sprint and track days and enjoy driving that car.

The 180SX will remain how it is and how it has been for the last 4 years. It has also had to undergo sacrifices for the Hilux, my desire to compete in a national drifting series was put on hold, my desire to build that car into a more competitive vehicle was put on hold and its basically sat without use all year.

The motorcycle build has also been put on hold because of the Hilux, I recently sold the Ohlins front end and Brembo brake setup to buy tyres for WTAC. This build now heads in a different direction and I will not start work on it till the passion and vision is there.

Do not take these points as a negative though, I feel so happy about where I am right now, that plain white Hilux symbolizes my freedom to do whatever it is that I want to do in the future and gives me unrivaled flexibility. Sure I wont be able to undertake a national drifting series or be a competitive drifter but im free and that’s exactly the reason I built this car and its a true reflection of who I am. I simply couldn’t be happier.

Thanks to everyone that’s helped along the way, those that have given me positive reinforcement have made a very big difference in this build, I hope that I can meet as many people as I can along the way.

Tags: ETS, People, Reflections, Thanks
Share This Post
Previous ArticleETS Pit Kart – That will doNext ArticleWTAC – Highs and Lows
You May Also Like
ETS stickers are here
December 18, 2010 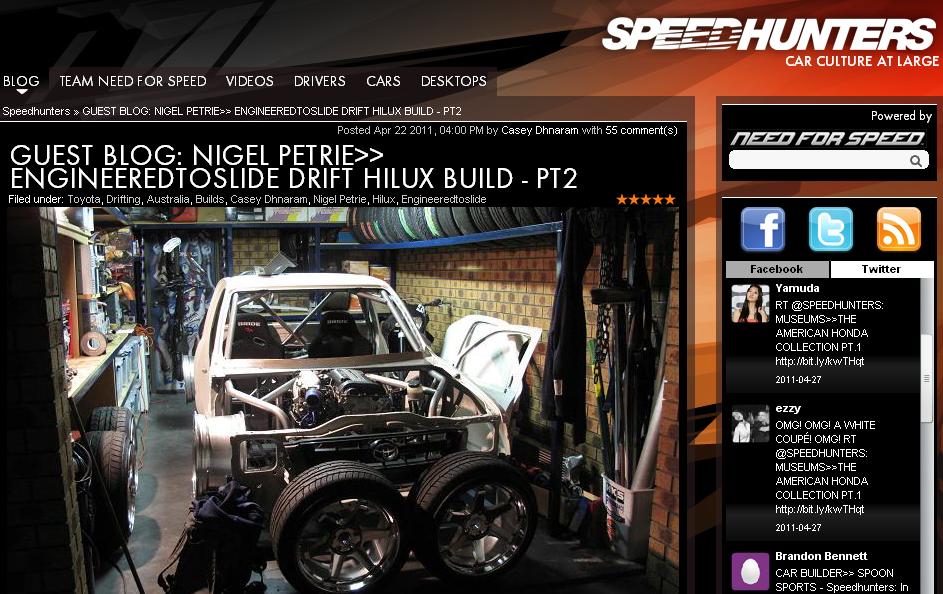