Here in southern Australia the days are getting shorter, colder and winter is less than a week away. Planning to test drive a car that is almost 100% bare metal isnt the easiest thing to do. 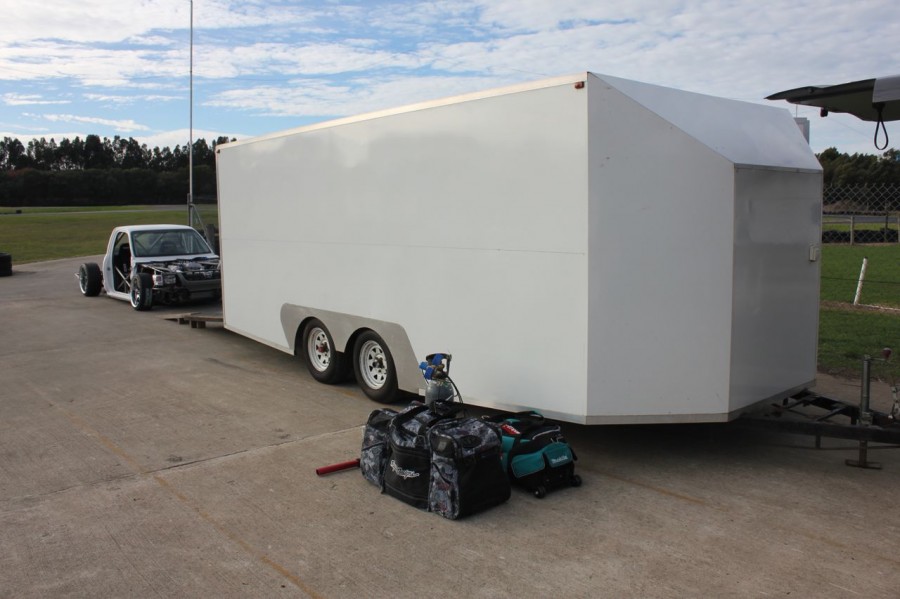 First things first I needed was a track, secondly I needed it with very short notice. Answering my prayers was Freddy from my home town, Freddy is a member of the Go-Kart association and he gave me the keys to the secluded racetrack to test the Hilux, on the proviso that I didn’t do any drifting. So it kinda seems dumb to test a drift car without drifting it you say? Well not really, what I wanted to do was to gain confidence behind the wheel. Test the balance, grip, handling and overall feel of this creature I had created. You truly get to know any car when you balance it on the edge of grip, once you have that fine line sorted out then you can go past it and really have some fun! Before you ask no there is not any video from today, my aim was to just spend the day with my car and enjoy driving it. The silent country side of a small country town, my 2.5 years of hard work and I just spending the day bonding and getting to know each other, it probably sounds pretty stupid but you spend the amount of time I have building something like this and its days like this you dream of having. Hitting that start button and firing it into life, its the first time I have been able to just let it run without worrying about the neighbors, a few stabs of the throttle to clean it up and its almost warm enough to drive. The tune that Andre from HP Academy did on this is really nice, this motor used to be controlled by Microtech in my PS13 and although it was tuned really well its just night and day compared to the marriage between LINK ECU and Andre combined. I took a drive around the track sans helmet to get a feel for things, I quickly learned that I needed two things, the first was a helmet (because this is fast, its cold and I do not have a windscreen) the second was the pedals, I like to heel and toe a lot and the orientation of the brake and throttle meant this was a little difficult. I realigned the pedals by adjusting the Wilwood pedal box, headed back out on track and did about five laps. Those 5 laps really made me feel comfortable with the chassis. After two or three laps the brakes really started to bed in, all day the brakes impressed me and as the rotors and pads came together as one they just got better and better, this stops incredibly well, I guess 850kg cars do that right? The power steering setup started to work better aswell, I have a small issue with cavitation, but as the day went on it seemed to fix itself, braking hard and then turning in in this really impressed me, there was never a hint of understeer even on cold tyres, turn in was simply amazing, late braking followed with that quick jab on the wheel just sent it straight through the corner. The V8 supercar blade swaybar ends coupled with my chromoly link bar worked incredible, I was worried there wouldnt be enough roll on the softest setting and to be honest there probably isnt (a V8 super car is around 1600KG this is 850kg) but it still rolled just enough and held the chassis incredibly flat. Talking about the chassis, in the past I have spent most of my time in incredibly loose S13 drift cars, taking that leap straight into this chassis with 0 compliance anywhere was a big deal for me, everything was so direct, each degree of steering movement resulted in instant feedback, I could trust what it was going to do next and after I learnt its characteristics I could do what it needed. How much power is too much power for a go-kart track? about 287kw to be excact…… The first thing I noticed with this engine was its response, its low end tractability, it comes down to two factors 1 being Andres tuning capabilities, and 2 being 500kg lighter than anything alse I had driven before. Suddenly it felt like this SR20 was an SR40, forget about onboost gip, that is non exsistant in any gear, on a large track I would be able to wind out each gear and work it into grip with easing off the throttle, but on this track it would just light up and then it would be time to brake. Its ridiculously fast and I would one day love to fit up some full slicks and shoot for lap times, its the confidence of each little area of the build working the way it should to produce an overall effect, that effect simply put a smile on my face. Whats next? Well the build isnt finished but im now in another state of mind, its been driven, its been abused, it took it, im happy and its given me the drive to give it the extra attention it needs to look as good as it performs. I see a lot of powdercoating, plating, sanding and finishing on the horizon. But for now I am over the moon at what I have achieved and where this has come from. If you had of showed me a picture of this car some 2.5 years ago when I was making up my tube bender and tube notcher and teaching myself how to TIG weld then I would have thought that this is un-achievable.