In this post i want to look at D1SL engine bays, i just cant get enough of looking at the way the japanese tune the Sr20, there are cirtain rules in D1Sl but they mainly restrict the modifications done to the chassis not the engines.  Heres what i saw on an overcast Tsukuba sunday. Big oil coolers are a must in the heat of battle Vmounts look spectacular but after doing a Vmount setup 5 years ago i would never do it again. Dont be fooled by the silver carbon front tubs, in D1SL you have to retain factory wheelarches, these ones are just for looks. A very neat setup, notice the small catch can next to the brake booster? Its a D1SL requirement to run a gearbox and diff breather/ catch can. 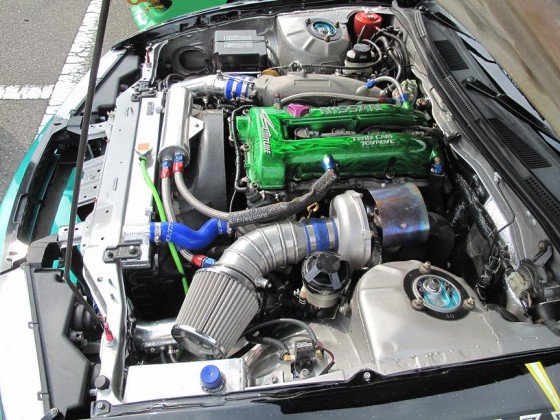 This well sorted JZX100 was packing some heat! But back to the SR20s, this S14 features a HKS30/37 turbine kit and neat intercooler water spray setup. Printed engine bay looks fantastic, pitty the intercooler is bent like a banana All cars required recirculated wastegates, this car didnt need to worry as it still ran an internal HKS setup. This AE86 ran a TD06 setup and was really fast I learnt a lot from this S15s setup, it was well done and retained a lot of factory gear. This Laurel was well setup Bais Origin sponsored 180sx was at the event. Nitrous was pretty common through the D1SL competition cars To finish off heres a shot of the MCR factory S14s rocker cover glistening in the sun. Hope you enjoyed the engine bays of D1SL and got some greast ideas from this post.